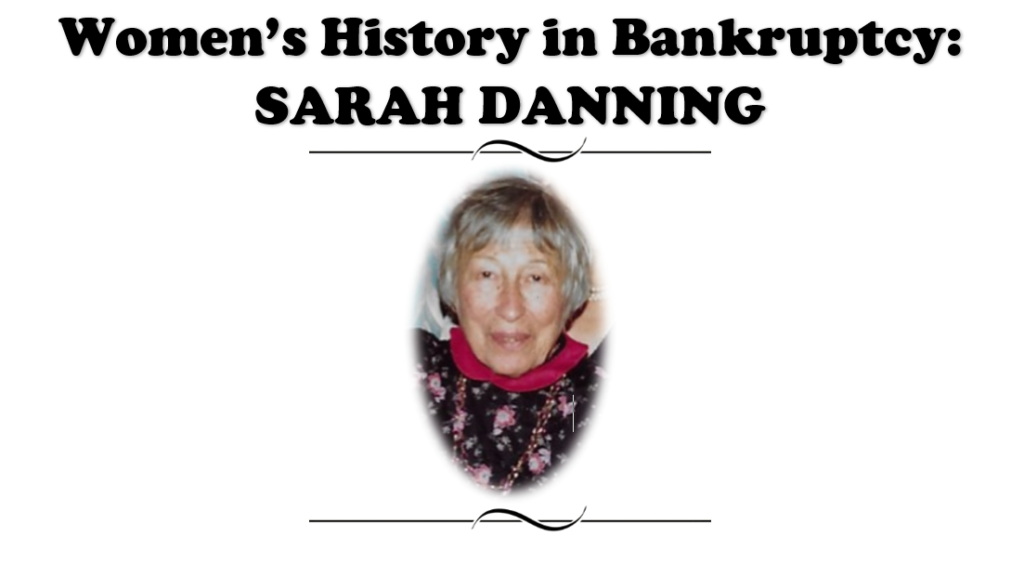 As Women’s History Month Comes to a Close, LABF Honored and Recognized Some of the Women Trailblazers in our Bankruptcy Community Who Opened the Door and Set the Path for Today’s Women Practitioners.

Sarah Danning was the country’s and the district’s first female bankruptcy trustee.

Danning began practicing law in Los Angeles a year after she graduated from USC Law School in 1923. In her later years, she recalled the gender discrimination she experienced early in her career, revealing advice she received while applying for her first legal jobs: Never tell any prospective hiring law firm that she was able to type, as law firms were likely to give her secretarial work rather than legal work.

One of her first jobs was with The Local Loan Company in Los Angeles. She later had an office in the Subway Terminal Building, which opened in Downtown Los Angeles in 1925 (designated Los Angeles historic cultural monument #177). She entered the practice of bankruptcy and became the country’s first female bankruptcy trustee.

One of six siblings, she passed her commitment to bankruptcy law on to her brother, Curtis Ben Danning. 17 years her junior, Mr. Danning later became one of the founders of the Danning Gill firm. Sarah Danning worked well into her 80s. After retiring from her practice as trustee, she made weekly visits to the Danning Gill offices, where she drafted wills for her own clients. A Danning Gill staff member who befriended Ms. Danning recalled her as a “spitfire” who always spoke her mind. Another member of the firm described her as “an exceptional woman, intelligent, humorous and kind.”

Sarah Danning was honored by the State Bar in 2003, when Ben Danning accepted certificates acknowledging the siblings’ respective 50 and 75 years of practice, as told in this State Bar posting: click here. Ms. Danning passed away later that year at the age of 100.